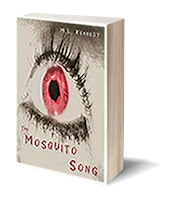 From Tiny Toe Press:
Hunted by amateur assassins, confounded by a mysterious notebook, and vexed by modern technology, a derelict vampire travels to Chicago for answers. And maybe a little blood.


This is definitely a non-traditional story for a vampire.  The format its presented to the audience is a bit different, present tense first person.  He doesn't really describe himself as tall, dark, handsome, rich, exotic, worldly...none of the things we normally associate with the modern vampire.  This guy could be anyone.  He could be your neighbor from down the street.  I felt this lent a relatability to the story that made it a little more realistic.  I can easily feel the vampire's voice narrating this whole story, as he's driving down the I-90 on his roadtrip.  He's snarky and sarcastic, and he's a little bored, in my opinion.  I really enjoyed his wit and dry sense of humor.  Then someone finds him and tries to kill him.  The hunt is on.


The cast of characters in this novella are all quite unique and interesting.  I had a couple favorites, and lets just say I will never look at a Rocket Pop popsicle in quite the same manner.


The thing about a novella is that there are always a couple unanswered questions, that really would benefit from being explored further in a full length book.  But all in all, I felt this was a really good story.  I would recommend it, definitely.  At times it did feel like it wasn't exactly a vampire story, but just a story about a guy who is on the search for some answers.  And he's a little tougher than your average guy.  A little smarter.  And a bit more creative.  But heck, who says a vampire has to be a sparkly guy with a European flair, and enough money to make Bill Gates envious?  It was nice to read something different.